Clayton Bond is an attorney and counselor at law, and an advocate for the rights of lesbian, gay, bisexual and transgender people. He is a member of the board of directors of Children of Vietnam.

A cousin of the late civil rights and anti-war activist Julian Bond, whose integrity and commitment to equal justice continue to inspire him, Clayton is the spouse of former U.S. Ambassador to Vietnam Ted Osius. They are the parents of two preschoolers and reside in Ho Chi Minh City, Vietnam.

Clayton resigned from the U.S. Department of State in 2017, following 16 years as a Foreign Service Officer. He served in Washington, D.C., Colombia, India, and Singapore; as well as in consular affairs, executive secretariat, human resources, public diplomacy, and administrative management positions.

A graduate of Hampton University (BA, political science), Clayton has master’s degrees from the University of Oxford (environmental change and management), and Harvard University’s John F. Kennedy School of Government (public policy). He holds a law degree from Northwestern California University School of Law and is a member of the State Bar of California and the American Bar Association. 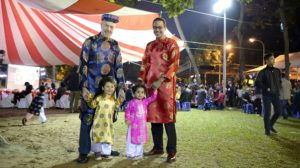