The Board of Directors, members and staff of the US-ASEAN Business Council convey their deep condolences to the Powell family, the American people, and friends in ASEAN and beyond on the passing of the 65th U.S. Secretary of State, 16th U.S. National Security Advisor, and 12th Chairman of the Joint Chiefs of Staff, Colin L. Powell.

General Powell had a strong connection to Southeast Asia. He spent significant time in Vietnam in the 1960s both before the war as a senior tactical advisor as well as during the war as a battalion staff officer. Later in his career, General Powell continued to engage with ASEAN and participated in the Council’s dinner gala honoring Vietnamese President Truong Tan Sang during his visit to the United States in 2013. 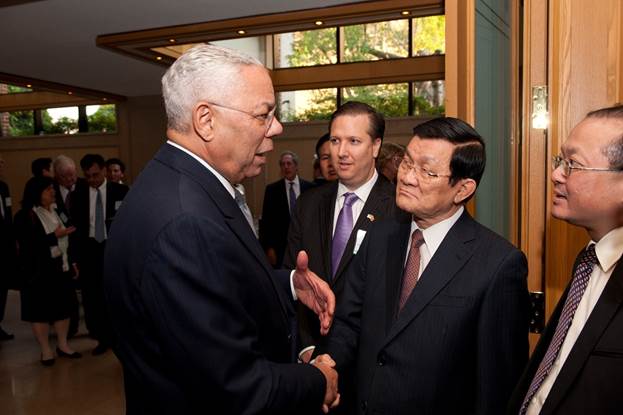 “While a career diplomat, I was most impressed by Secretary Powell’s determination to empower his team at the State Department,” said Council President & CEO Ambassador Ted Osius. “He preferred to consult a lowly desk officer than someone who had an exalted title, and he devoted great attention to ensuring that diplomats had the necessary training to serve as effective leaders. For these and other reasons, the career cadre of diplomats at State really revered him.”

“Southeast Asia played an important role in General Powell’s life from his early days as a soldier in Vietnam to his engagements at each ASEAN Regional Forum while he was Secretary of State,” said former Council President & CEO Alex Feldman. “After serving on General Powell’s senior team at the State Department, I was honored when he recommended me for the role I ultimately obtained at the Council. Throughout my career, he continued to instill in me the value and strategic importance of ASEAN to the United States. I am forever grateful to have known General Powell and been a beneficiary of his leadership, management style and friendship.”

The Council will deeply miss General Powell and remember his contributions to American diplomacy and foreign policy.